The last Sunday of November, this month has gone by  in a flash, the same cannot be said about my stitching. Luck for me this is a Sunday for Slow Stitching.

Here is what I have stitched so far on Block number 3 (Hocuspocusville quilt) I started stitching the door and moved onto the roof since about six this morning. That little sign took me nearly 2 hours to stitch. 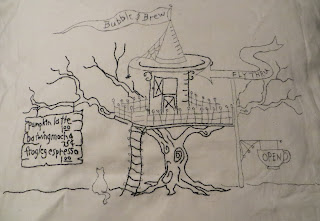 I don't know if you can see the little circles along the ladder sides and above the balcony fence but those were supposed to be dots for french knots, I have trouble seeing the dots after stitching for a while so I traced the circles that were on the pattern, what I plan to do is use black seed beads instead of french dots for two reasons, my french knots often resemble small cauliflowers and when I first bought the pattern I had planned to use beads on some of the blocks to make it more my own.  I left the cat unstitched for now because I have a few ideas running through my head.

I will be getting back to stitching this block this afternoon after I do a few errands and read the newspaper. In the meantime I'll post this to http://www.kathysquilts.blogspot.ca/  for Slow Sunday  Stitching.
Posted by Deb at 7:32 AM