"No winter lasts forever. No spring skips its turn." 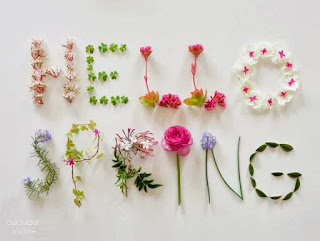 The tornado warnings have increased to cover Georgia, SC and NC, and Alabama already had one in the wee hours of the night.

Northern parts of the country are getting inches and inches of snow, heavy winds and a storm named Toby.

Though winter may be long, Spring always comes, at my house besides the rain, winds and tornado warnings my Jasmine is in bloom. 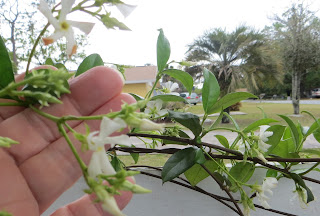 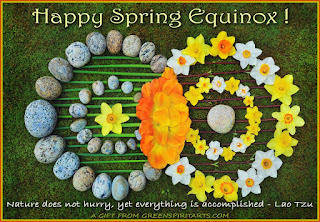 Well St.Patrick's day has come and gone, the new moon rose last night though of course we didn't see it, and it's time for the March TUSAL report.  What is a TUSAL you might be thinking to yourself, I'll tell you it stands for Totally Useless Stitch Along where bloggers each new moon post the  orts of their stitching for the month, curious? well jump on over to find out what it's all about https://itsdaffycat.blogspot.com/2018/01/a-totally-useless-stitch-long.html
Anyway here are my orts for March so far and the orts to date in the jar, the loose orts will join the others in the jar. 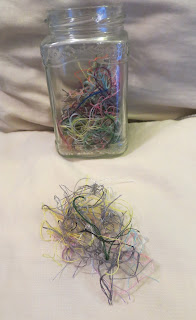 These orts are mostly from the Spring hand embroidery piece which I completed the stitching yesterday afternoon. 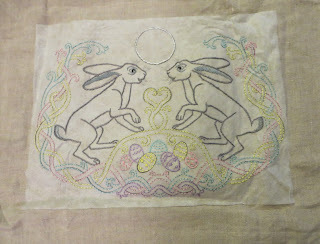 The above photo is before the stitch and wash away product was rinsed off, and this photo is after where all those dark lines the thread didn't cover disappear with the product. 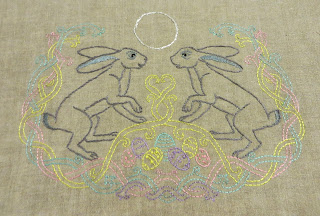 I am tossing about a few ideas to finish, frame it, make a pillow, or just back it to make a small wall hanging or table decoration.    I need to decide as Spring is fast approaching.

While going through my closet last week moving around clothing and placing the cold weather stuff to the back I came across this cute short sleeve denim top that I haven't worn in a while, probably 2 or 3 autumns back. 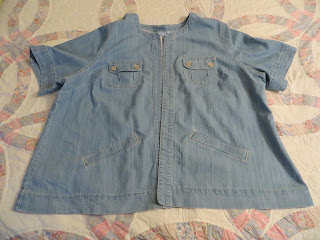 I decided it needs to be embroidered, it has so much blank space for stitching I just have to come up with an idea or two, I have a few ideas forming in the brain but nothing concrete just yet, I know 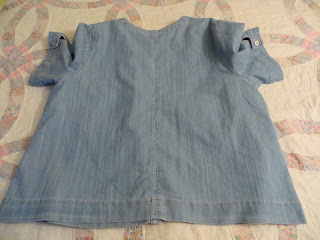 with all this blank space I want to fill it.  I  love it doesn't have buttons or a collar, I can see a vine of some sort running up plackets where the buttons and buttonholes would have been.  I will be posting today at Kathy's Quilts https://kathysquilts.blogspot.com/2018/03/slow-sunday-stitching_18.html

It's that time of year where we set the clocks ahead one hour so we know Spring isn't too far behind, but weather wise it sure doesn't feel like it.

The evening temps have been in the 30's again which means the early mornings are quite cold, so I shifted my morning walks about an hour or two later a few times this week.  It's warmer this morning and we are expecting rain later in the day, we can sure use it.

The progress on the Spring hand embroidery project is coming along, though looking at the knot work I wonder if I should have used a stem stitch. 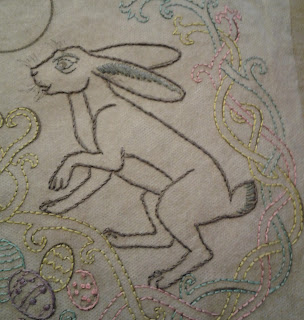 I thought this guy was completed but I noticed I have to stitch the pupil of the eye, sigh it will wait till I'm ready to stitch the moon.
I will be linking up at Kathy's Quilts today for slow Sunday stitching here is the link if you would like to see what other bloggers are slow stitching.
https://kathysquilts.blogspot.ca/2018/03/slow-sunday-stitching_11.html

I'm still making the time for trips to the library and logging books read for the Library Love Challenge. 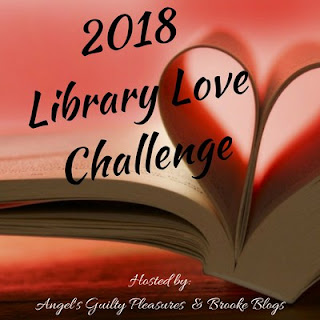 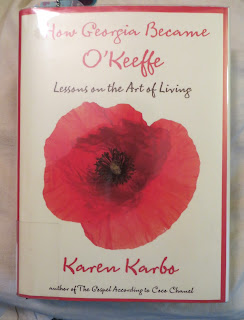 A biography by Karen Karbo was the first book read for March, 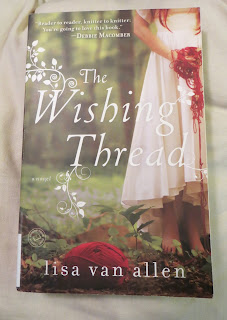 Lisa Van Allen's the Wishing Thread was suggested bu a friend and to my surprise I enjoyed it just enough to keep turning the pages.
The book I am currently reading is the latest in a series by Amanda Lee, I love a cozy mysteries. 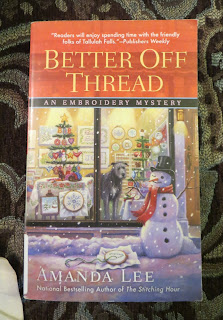 The first two books listed qualify for the other reading challenge I am doing, both are new to me authors. 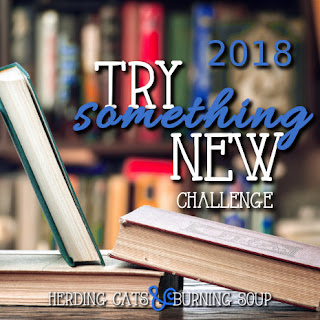 Well that's all I have for now, I am off to the Master Gardener's Spring Festival today I am looking 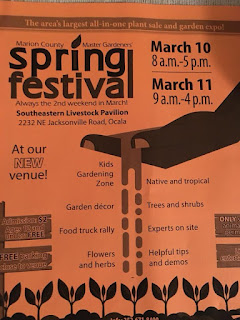 for a quirky piece for my garden and maybe pick up a few plants to replace some of what I lost to the winter freezes.  Wandering around among plants and garden decor is a perfect way to spend a few hours and the weather has warmed to a comfortable 60.
Posted by Deb at 7:24 AM 6 comments:

Here's the stitching update for the spring piece I am working on, it is March Hares done in pastel colors for spring. I am using a piece of linen from an old dress my friend Jeanne sent me, when I saw the fabric I knew I wanted to embroidered a piece of it with my mind made up I pressed the cloth and cut off a generous piece.  The pattern is printed out on Pellon's Stitch and Wash Away which measure 8x11". 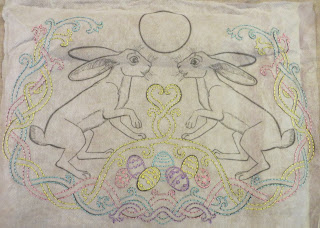 Now on to stitch the Hares and moon.  I will link up today over at Supermom No Cape where other bloggers from all over post what they are hand embroidering stop in and have a look, be inspired and pick up a free vintage pattern.https://www.supermomnocape.com/category/stitchery-link-party/
Posted by Deb at 2:33 PM 10 comments:

There is an old saying regarding weather during the month of March. If March comes in like a lion and goes out like a lamb (and vice versa). March is a changeable month, containing the vernal equinox, two full moons and being the transitional month between the cold and snows of winter and the warm greening days of spring we can only hope it will go out like a lamb?

March is certainly coming in like a lion here in Florida and most other places throughout the U.S. On the 1st of March we began the day with mild spring like weather but as is common with the weather quickly changed with the stirring winds and by the weekend once again early morning temperatures were at 35 degrees. As I see it March came in like a lion wilting the beautiful blooms on my rhododendron, I'm anxiously awaiting the arrival of spring! As I'm sure the rest of you are.

I am currently working on a new hand embroidery piece for Spring, the start of this project began with a piece of linen fabric from a dress my friend Jeanne sent me all the way from Kansas. 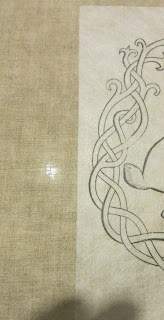 I used Pellon's Stitch and Wash Away to print out the pattern which I do when the pattern has lots of detail that I know I would surely wobble tracing those lines and since the fabric is darker tracing on the light box might be difficult as these old eyes don't see as well as they used to even in the best of light. 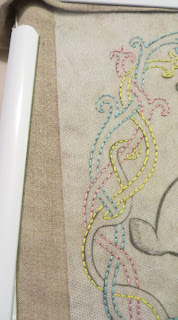 I finally put together a small stone cairn pendant ending it off with a piece of beach glass found many years ago.

I love rocks, stones and crystals and have a small collection in boxes and bowls throughout my house. My collection of beach/sea glass has dwindled down over the years, I rarely find it on the beaches here in Florida and I don't think I ever found a piece at any of the springs, lakes, rivers here, perhaps its time for a trip north or northwest for a beach glass hunting expedition.

I did some house hunting in the Kissimmee area, mainly checked out a few of the neighborhoods and looked at a few model homes to get an idea of room sizes etc. I want to check out Winter Park and Altamonte Springs over the next week or so.
I've been reluctant to the idea of moving farther south and I'm not fond of all the city traffic on the major highways and in some parts of nearby cities, yet it does hold a bit of excitement for me and there is access to so much more as far as shops, museums, theaters not to mention parks and little cafes.

The other day I was cruising around town running errands and the K-Mart is closing, not just any K-Mart mind you but the one that has been here from the first days I lived here, I felt like I was punched in the gut, then as I was driving home the Circle K gas station was gone, not closed but bulldozed to nothing but a big ole empty space with earth moving equipment behind a chain link fence, again another business that was from my first days living here, I felt so sad yet as I was driving home I took it for a sign that it was time for me to move on from Ocala.
So now I'll look a little more closely at the houses we tour and try to find one with a nice pool in the back cause I figure if I'm moving to or near Orlando I should at least have a pool so I can avoid driving in all that traffic and lay about the pool.

One of the houses has this wonderful backyard view from the screened in lanai, this is how my next backyard should look. 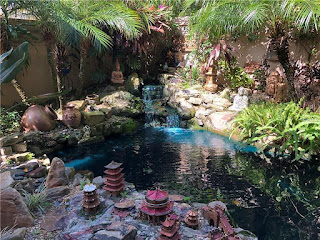 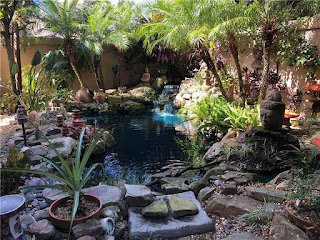 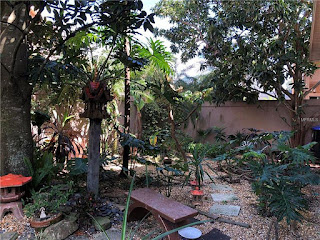 I would want a space to lay down my yoga mat though I suppose the lanai would do.  I love all the stones instead of grass, it just looks so serene and inviting.  My backyard did have a nice little spot for yoga with a few pieces of statuary and potted plants to provide some privacy unfortunately while on vacation two years ago everything was stolen I didn't bother to replace it. Number one requirement for my next house is a fenced yard though I love the wall in the photos.

I will leave you with a little March poem, weather reports forecast a major snow storm for the northeast by mid week. 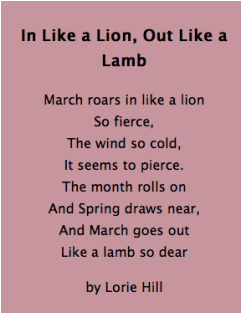 Linking up today to https://www.supermomnocape.com/making-waves-embroidery-pattern-stitchery-link-party-137/