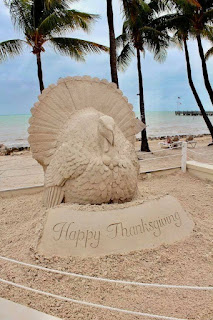 Walking about the Garden

Midway through November, the weather here in north central Florida has been cloudy for nearly a week with a few bouts of rain tossed in, and for the last few days it's been cold and gray so gray in fact when I step outside I expect to see bare trees and snow flakes but it's Florida so I am ever disappointed.
What I have seen though is some unusual fungi growing in the grass in front of the house, I have only been living in this house since June and I am finding all sorts of interesting things here and there in the yard. 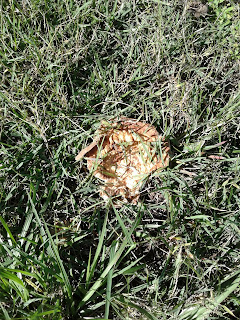 At first I thought is was a large mushroom that I had squashed while walking along with my cane until I saw another one about a foot away from the first. 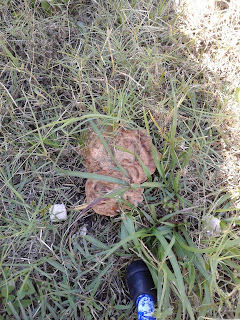 I supposed I should have zoomed in a bit but I was having a hard enough time holding the phone and cane so it is what it is.  I try to walk around the house a few days a week, daily is out of the question now with the uneven ground even though my knee is improving my footing has not.

Along the back of the house there is a fallen tree which I'm sure host all manner of insect and little wildlife.  On Friday I noticed these lovely fungi growing I wonder if they will nourish a critter or two. 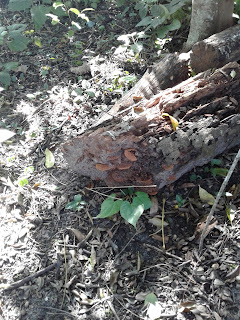 I plan to leave the fallen tree and plan to document it's decay, for me there is something sacred in knowing it's feeding the earth beneath it and perhaps housing something within as well. 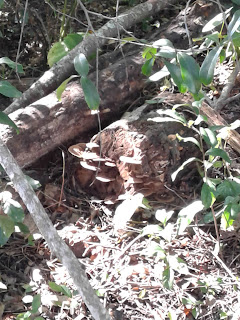 The oranges are ripening slowly on the branches and several have fallen without me noticing them until they have half rotted. 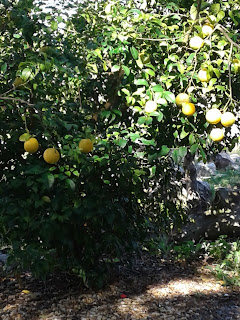 Once these are ripe and picked I will trim the branch back it obstructs the entrance to the side of the house. 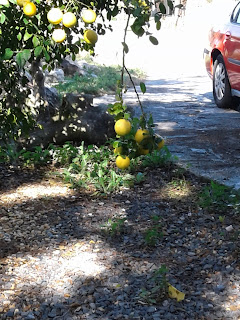 Moving it out of the way takes care because her 2 inch thorns lethal weapons to say the least.  I imagine those thorns are the reason the birds don't peck into the oranges. 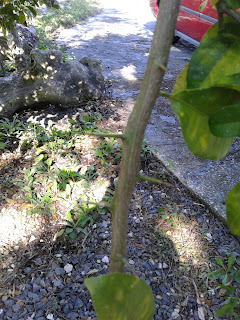 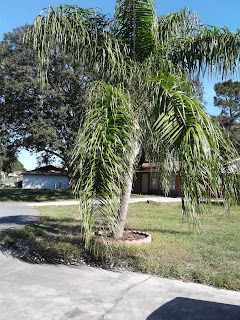 it from sweeping the driveway.  The two lavender plants are doing quite nice filling out a bit and growing taller. 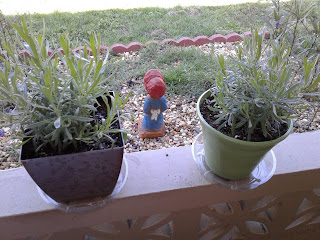 I really hope that growing them now during the fall and winter will be enough for them to thrive in the spring and summer months, my thinking is once I put them in larger pots during the warmer weather I can move them during the high heat of the day.

Well that's my garden update for the first half of November.

Well November just rolled right up along bringing with it some much cooler weather here in Central Florida and a time change too, this time around it's Fall back and poof just like that we get an extra hour to our day today.  Did you remember to turn back your clocks? This year I actually set the clock on the stove and microwave before bed and waited till morning to set the wall clocks back.

I spent the late afternoon and evening stitching away on the Greenman and I'm happy to say he is now completely stitched.  I still need to wash off the stitch and wash product off today but I am so glad I finished the stitching. This is him just out of the hoop. 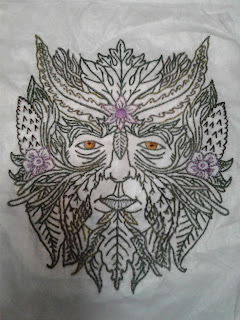 I can not begin to tell you how relieved I am to have finished the stitching, my moods have been so off lately when it came to hand embroidering, on the days when my knee was bothering me so much I just couldn't trust my hands to hold the needle or my eyes to see well enough to stay on those lines. I missed the slow steady steps of stitching each day and I could feel my blood pressure increasing with each day I missed stitching, I needed my zen space back and in the end patience and rest paid off in as the pain lessened on my knee to the point where I am able to walk again though I still use the cane for balance.

Yesterday morning with a bit of chill in the air my thoughts turned to baking a bit of something for breakfast so I pulled out a package of scone mix, preheated the oven and proceeded to mix up a batch of raspberry scones along with some brewed coffee.

I love the ease of just add water mixes the Sticky Fingers Bakeries scones are ready 16 minutes after you pop them in the oven and they tasted wonderful, light with just a hint of sweetness to them. Clean up was a breeze along with the bowl and fork to wash there was the measuring cup and the baking pan, I used parchment paper instead of greasing the pan and the bottoms browned just right.

Now that the Greenman embroidery is completed I can concentrate on a few Christmas pieces I want to do.  I am hoping to get this  Kathy Schmitz pattern traced later today. As lovely as it looks on the package I don't plan to stitch it in black I will use a few traditional Christmas colors.
I am linking my post today to Kathy's Quilts for Slow Sunday Stitching the link is here:https://kathysquilts.blogspot.com/2019/11/slow-sunday-stitching.html
Stop by and see what other bloggers are slow stitching today.
Posted by Deb at 7:43 AM 7 comments: