It's always good to be back home.

Things are returning to normal after my short time away. I ended the month of June with a trip to the Kennedy Space Center to watch the Saturn V rocket launch at Cape Canaveral, the launch went as scheduled however there was a problem at the separation stage so the rocket was not able to complete it's mission.

On the way to Cocoa Beach I made a stop at the Canaveral National Seashore to take a short hike on the Turtle Mound at the national park. There was a wooden walkway to hike along (this one without stairs) and lots of greenery to view as well as huge spiderwebs along the trail, luckily most of the webs were off to the side of the trail, but a few times I had to bend over and do a little duck walk so I didn't get a face full of webs.

On the way into the park as well as exiting we were greeted by a few turtles munching the fresh green grass along the road side.

For those of you that know me, time away wouldn't be the same without a stop at the beach, this time New Smyrna Beach where pretty flowers grew right up out of the sandy beach entrance, showing me there is hope for my garden.

While driving along the interstate heading for my hotel the car began to vibrate rapidly, so following instinct we headed for the upcoming exit and a slower pace, within a mile the car swerved and wobbled a bit and then there was a snap! Pulling into the nearest parking lot to see what was happening. 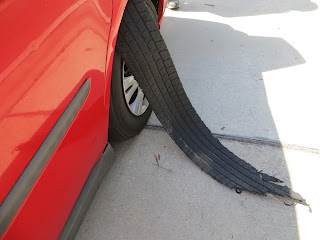 While on the phone with AAA two gentlemen pulled up behind us, had the tire off and a spare on in less than 5 minutes, then had us follow down a few the road to a gas station so they could put more air in the donut spare. While heading on our way to the hotel we stopped at a tire center to replace the ruined tire that way we didn't have to continue driving on the spare.

On July 1 there was a lovely full moon to enjoy as I celebrated my 60th birthday, this month will bring a blue moon when the second full moon of July rises on the 31st.
There was plenty of birthday cake with an overload of frosting that set my son into sugar bliss, I had to scrape most of it off, I am not a sweets person by nature and buttercream frosting one inch thick was just too much,
My sister sent me these little petit fours which are quite tasty they could pop nicely in the freezer, the petit fours are from 1-800-Bakery, and arrived on ice via Fed Ex as fresh as if they were baked right here.
She sent me them because our late mother always made petit fours during holidays, and wanted me to have a part of mom with me, what my sister didn't know is when I was a senior in high school I chose to make petit fours for the annual Senoir Tea and I made several practice batches at home which my mother enjoyed,  she had a very active sweet tooth, and when I removed the lid from the box you can bet those days in my mothers kitchen came rushing back.

On Tuesday, July 7th I once again joined Weight Watchers to aid me in losing those excess pounds that tend to creep up and stay with me, more so in the last year and with the added calories from those cakes it won't take long before they wrap around my hips with a forever hug, who needs that kind of love!

Here are a few more photo's from the Kennedy Space Center
I enjoyed my visit to the Space Center seeing the exhibits and watching the rocket take off up close was exciting for me as a young woman I had dreams of being an astronaut but a pronounced heart murmur put a damper on that particular dream.

I'm going to make my 60th year all about exploring new places in and around Florida.
Posted by Deb at 7:47 AM