A Little Road Trip to Jacksonville and Slow Stitching Sunday

On Friday I accompanied my friend G to Jacksonville so she could take care of business, it's nearly a 3 hour drive and when you aren't familiar with the area it's good to have a second pair of eyes to watch out for the street names, though I don't know how good that was going to be since both of us can't see a street sign without our eyeglasses on, I did use the navigation in my cell phone which talks us through each turn which makes traveling unfamiliar areas fairly easy.

My friend G and I haven't seen each other in a while so you can imagine the chatter that went on between us the entire drive, but we made it to or destination with no trouble pulled into the nearest parking garage and exited. Neither of us thought to note where the parking garage was, and I hadn't checked the phone to see how close we were to the place we were going.  Our destination was roughly 3 blocks from the parking garage and I did note the blue awning our the entrance, so we walked to the courthouse arriving about 30 minutes early and to our surprise you are not allowed to bring cell phones into the courthouse.  Uh Oh!

I decided instead of walking all the way back to the parking garage I'd wait in the lobby but first we both needed to use the restroom, she was able to go in because I had the cell phone, I on the other hand was told I needed to use a facility elsewhere, just when I was turning around another attendant at the security checkpoint said to just give him the phones and I could go though what a nice man.  So my friend headed to where she needed to be and I went back to the lobby both of us not realizing it was still about 20 minutes until her appointed time.  So I strolled the lobby several times back and forth then headed outside to walk around the courtyard several times. Did you ever notice how slow time moves when you are waiting.
Downtown Jacksonville is a lively city with tall old building and people and cars hustling here and there, it immediately takes me back to my childhood growing up in New York, there is nothing like the sites, sounds and smells of a city. I wandered over to where I heard live music on a square across from the courthouse and sat down to listen for a while. My friends appointment time was just coming up so after listening a little longer I headed back to the lobby and 10  minutes later we were on our way back to the parking garage, we missed one of the cross streets but quickly recovered our steps and found the parking garage.

Over lunch we both caught up a bit more and made plans to try to make an effort to get together sooner, it was  well over a year since we were last together we both live in the same city yet never seem to have the same time free, with family obligations and work schedules and other pursuits it can sometimes be impossible to get together.

It's the last Slow Stitching Sunday for January time does fly when you are having fun or so it seems.
I 'll be linking my post at Kathy's Quilts today https://kathysquilts.blogspot.ca/2018/01/slow-sunday-stitching_28.html

I finished the stitching for the little Valentine I made using cotton variegated floss and stitching on 100% cotton fabric. 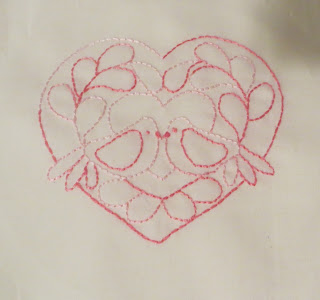 Yesterday after completing the stitching on the Valentine piece I started stitching on one of my next projects so far I stitched the crudely drawn snowdrop. 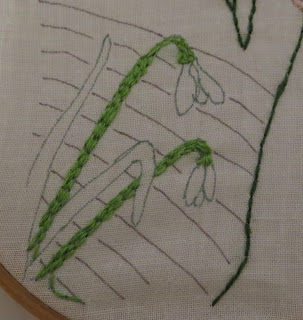 I plan to be working on this today, we are due for some heavy thunderstorms and rain today so it's a good say for some hand stitching.

I did some organizing of embroidery floss a few days ago, here are five of my bins these are all DMC floss, I have about 5 or 6 more bins of DMC bins of wrapped floss and several smaller totes  and containers of skeins. 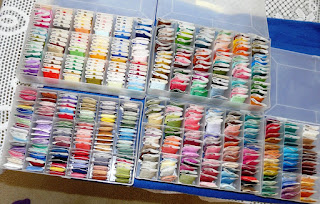 The above photo and below are bins I am currently working from I am known to pull all knew skeins to start a new project I will let you in on a secret I usually only wind my floss after I have used it from the skein,  I don't really like kinks or bends in the floss once it is wound.
I am getting better at using up a floss skein before I pull out a new one for me a hard habit to break.