On Thursday in the late afternoon a fierce storm blew through with heavy rain, high winds, and hail. Tornado warning were in effect and as I went to step outside to move my hanging planted I stopped in the doorway and watched as palm tree branches flew through the air while the wind roared louder than anything I have ever heard. I grabbed my phone to record the sight only to realize it may be a tornado.

I stepped into the interior of my house briefly to rethink making a video, which I have trouble doing on my cell phone. My love of watching the rain won out and I opened my door once again and witnessed the little playhouse lift and tumble across the street from one neighbors house to the other. I did snap a few photos of the rain, the bits of trees in the driveway are the early pieces, by the time the storm was over the entire lawn and driveway were covered it bits of debris. 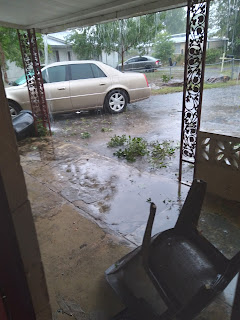 When the worst of the storm finally ended I stepped outside to check the yard where a few weeks ago we lost big limb and had arranged for a tree service to remove the tree, which is actually an old growth shrub taller than most of the trees in my yard. 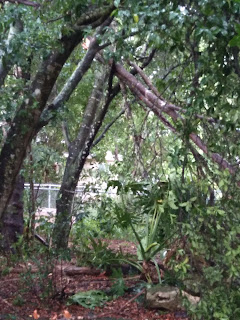 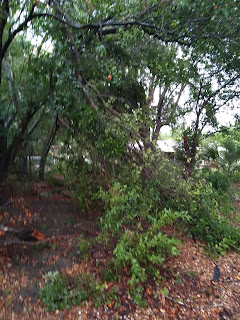 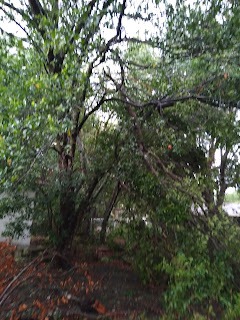 What I thought was two more branches down was actually 5, several leaning onto other tree limbs, they poor birds were flying back and forth to the obstructed feeder, all I could think of is I hope there were no nest in those fallen limbs. 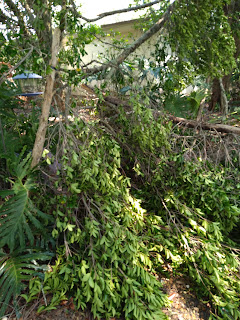 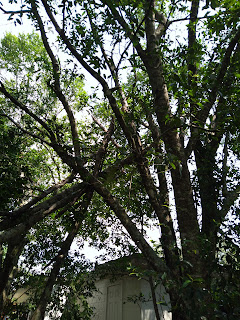 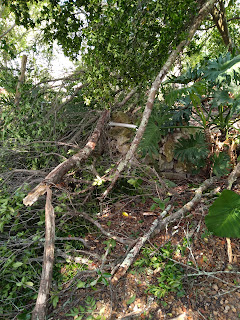 After I snapped this photo I realized it looks like a heart and even though mine was breaking at the broken trees I felt everything would be alright. 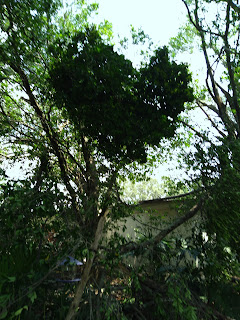 The tree service is supposed to come in the afternoon, I sure hope they make it though with all the damaged trees in the area I won’t be surprised if they have to reschedule. I surely hope not. I don’t have the heart to look about the yard after yesterday’s storm to see if any other branches have fallen.