A new Goddess for this weeks challenge

Once again I have decided to stray from the path of the suggested theme for this weeks goddess and I chose to do the Cailleach her themes are balance, cycles, rebirth, overcoming and winter. Her symbols are snow and blue items. In Scottish traditions, this is a blue faced crone Goddess who blusters with power throughout the winter months. She brings the snow and cold until the wheel of time turns toward spring on Beltane (May Day)

The Cailleach Bheur was a blue hag, said to frequent parts of the Scottish Highlands. Associated with winter, she was reborn on every All Hallows Eve and returned to bring the winter and the winter snows. She carried a magical staff, which froze the ground with every tap. She was also guardian to animals throughout the winter, and returned to the earth by turning to stone on Beltane Eve. In other traditions she changes into a young maiden, suggesting the changing phases of an earth goddess. Her sacred trees were the holly and the gorse bush, under which she traditionally threw her staff before turning to stone.

and here is the Cailleach right after she was removed from the light box waiting for the next step.
You will notice I added the two spirals to the piece to represent the ever moving circle of season and the swirling snows of winter.
I will be posting this over at https://timelessrituals.blogspot.com/2016/06/13-goddesses-challenge-week-5-native.html  as part of the 13 Goddess in 13 Weeks challenge. 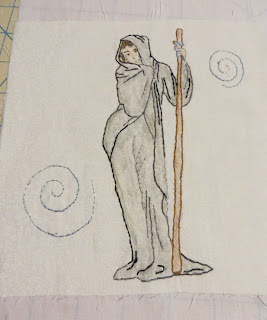 I am a day late but I am also linnking up over at http://www.supermomnocape.com/2016/06/27/vintage-embroidery-monday-stitchery-link-party-64/

Now I am off to the gym and hopefully as I was promised yesterday the new replacement mailbox will be put in this morning, but in all honesty I don't think it will happen let me be wrong.
Posted by Deb at 6:14 AM